The Fall Season is over!

See all the info below for the Season Wrap-up:

2.    MVP Announcements (on the main page for 15 minutes and more of Fame! www.PlayLegendsBasketball.com) 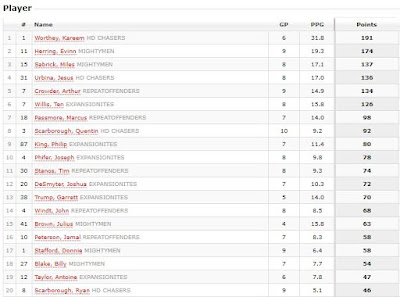 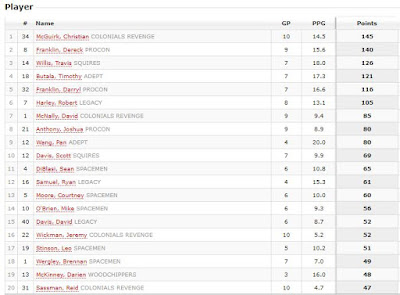 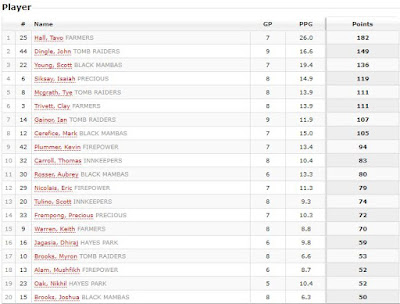 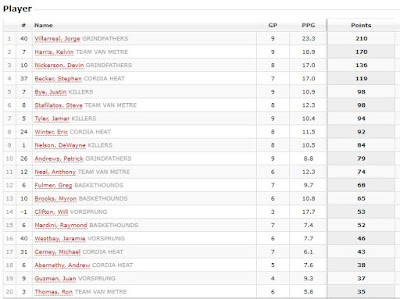 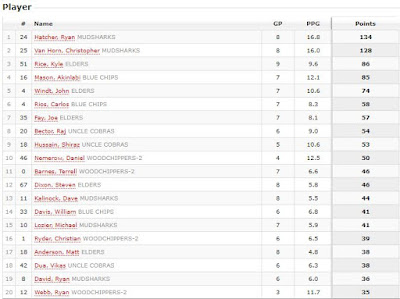 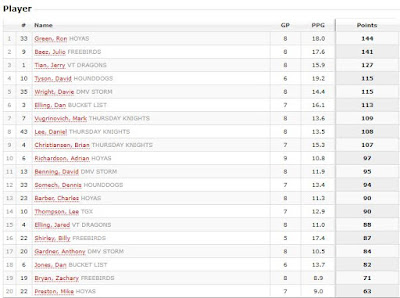 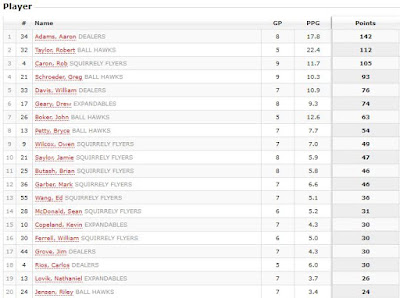 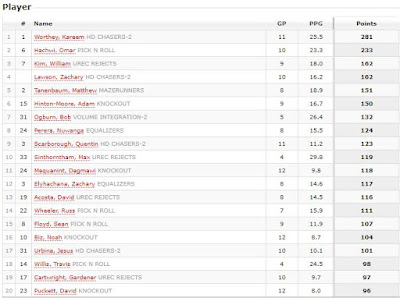 Summer is a Wrap...Plan Your Fall Run!

MD Select made the trip to N. VA to take the Summer A Division crown with a big win over HD Chasers to complete their undefeated 5-game sweep!  But are they good enough to compete in the main Fall Season in the Elite Division where competition is much tougher than a shortened Summer Season?! 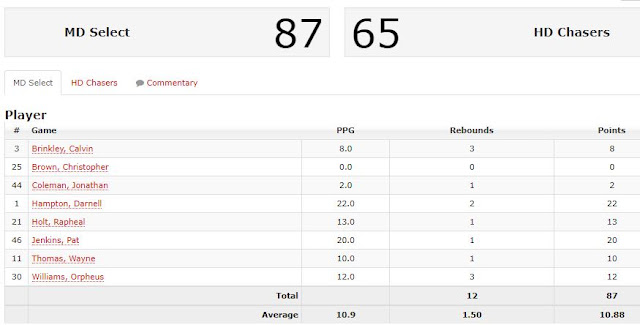 Other A Division Action 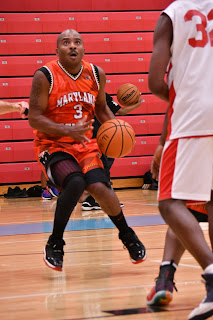 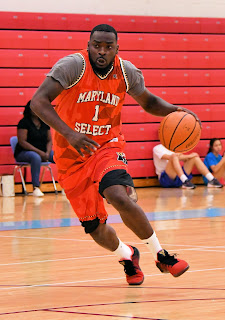 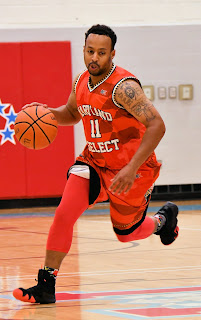 We Tired Coach takes down ArchRivals in an Experience vs. Youth faceoff!

Other B Division Action 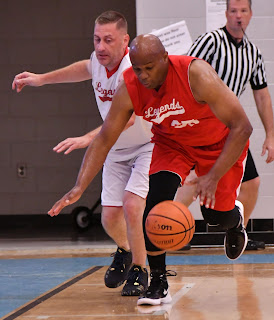 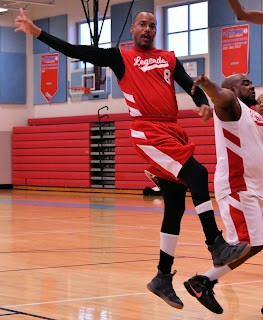 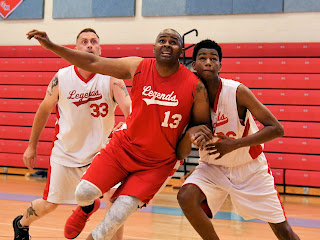 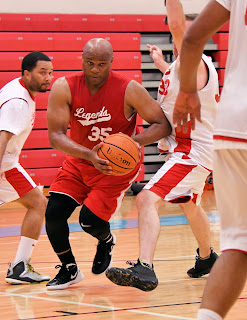 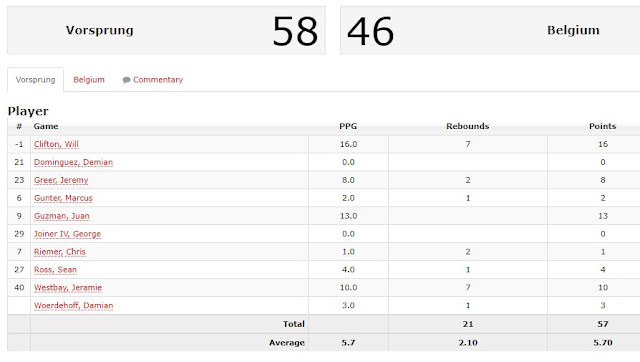 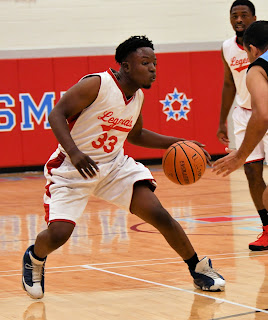 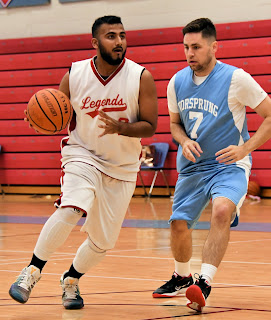 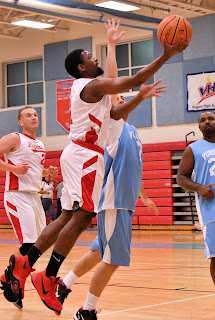 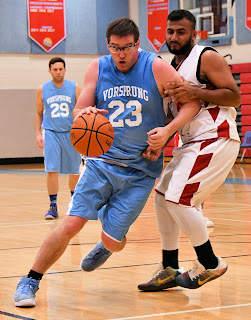 The stage is set for the Summer Finals below!

In addition, here are the top 10 scorers per league going into Finals Night.  Those in yellow vying for the title for their respective division!

If you aren't in the Finals, Come watch the excitement!

Even though they weren't the favorites, the Expansionites have repeated as champions! They were led by the duo of Garrett Trump and Ten Willis. The team played suffocating defense and had great ball movement. Ten poured in 37 points and a couple highlight dunks that made the Legends Top 10. Garrett had his usual acrobatic finishes. Andy Bechtle had too many assists/hockey assists to count. Ross Mitchell, Philip King and Tony Wills filled the passing lanes to create steals and disrupt the opponents offense. Total team effort. Congrats to the Expansionites! --Vinay Singh 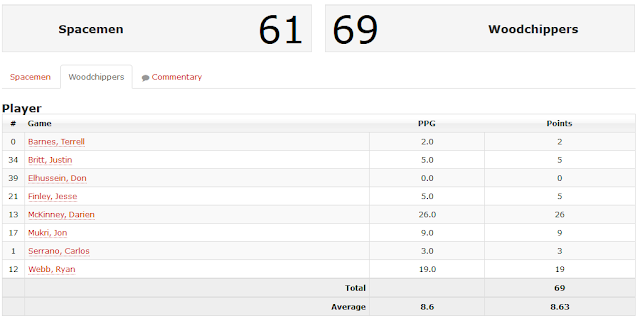 These guys prove me wrong again with my predictions against them. The Woodchippers win their 4th in a row! Hampered with injuries, they managed to defeat the great undefeated Spacemen team for their 10th overall championship. These guys play hard and together game in and game out. Sometimes it's tough to beat them twice in one season. Congrats to the Woodchippers! --Anonymous 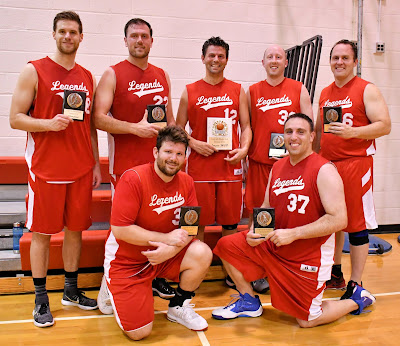 After their heartbreaking loss in the championship last season, the Black Mambas sank their teeth into the Farmers to get the win and lift the trophy above their heads!

The Grindfathers win their first championship after 3 seasons together! We started the season 1 and 3, but won all remaining games on our way to the championship. We had injuries that hampered us, but we persevered to our goal none-the-less. With only 5 players available during the championship game, it was difficult, but champions win championships. Jorge came through with 37 points to win MVP and top scorer for the league. I am proud of my teammates and what we accomplished.  --Patrick Andrews

The InnKeepers sure kept it together in this down-to-the-wire game against the FreeBirds, taking the victory by just one point! Both teams took extremely close victories in the semis and it seems they liked the rush!

The Dealers win their first championship! This tight knit blue collar crew strengthened their teamwork throughout the regular season, battling through frequent close games, a few coming down to the last shot. It took everyone contributing in order to make it happen, with tough team defense at the core of their success. The Dealers brought their A-game to the playoffs, culminating with an epic performance in the finals. The solid defense continued, excellent rebounding on both ends of the floor, and every player contributing points for the win. Offensive highlights were provided by Aaron muscling up in the paint with some amazing finishes, Bill dropped in some key 3 pointers from long range, and Alit worked actively inside and outside exploiting holes in the defense. Aaron landed the MVP with his high energy offense and defense, and nonstop intensity throughout the contest. The Dealers are currently renegotiating their contracts, hopefully free agency doesn't impact this cohesive bunch for the fall season.  --Kevin Bousman

In what amounts to a swan song for the HD Chasers-2 team as we know it, the team jumped out to an early lead over a formidable X-Factor team and never looked back en route to a 49-28 victory and their second league championship. It didn’t hurt that Matt Harper had a big offensive game, scoring 20 points including a contested fast-break dunk – no wonder he led the weeknight A league in scoring this season! It also didn’t hurt that the team’s defensive specialist, 16-year old Quentin Scarborough, stepped up with a gritty defensive effort that earned him MVP honors for the game. HD Chasers-2 will sorely miss the leadership of Lance Posey and Matt Harper for the upcoming weeknight fall season.  --Ryan Scarborough

Firepower claims their second championship! After coming up short in the winter, the team added Guards Kendal Bernardez and Alexander Frempong and also brought back Forward George Anderson from his hiatus. In adding these pieces to an already athletic and talented team of Myron Brooks, Kevin Plummer, Afam Okwosha, Bret Kenworthy, Eric Nicolais and Mushfik Alam, they seemed poised to make another run at the title. But after an awful 0-4 start to the season the team seemed ready to self-destruct. Instead, this team showed tremendous heart and came together when it mattered most. Firepower would not be denied as they went on to knock off 3 higher seeded teams and complete their unbelievable run to the Championship. What a season for Firepower!   --Eric Nicolais #29